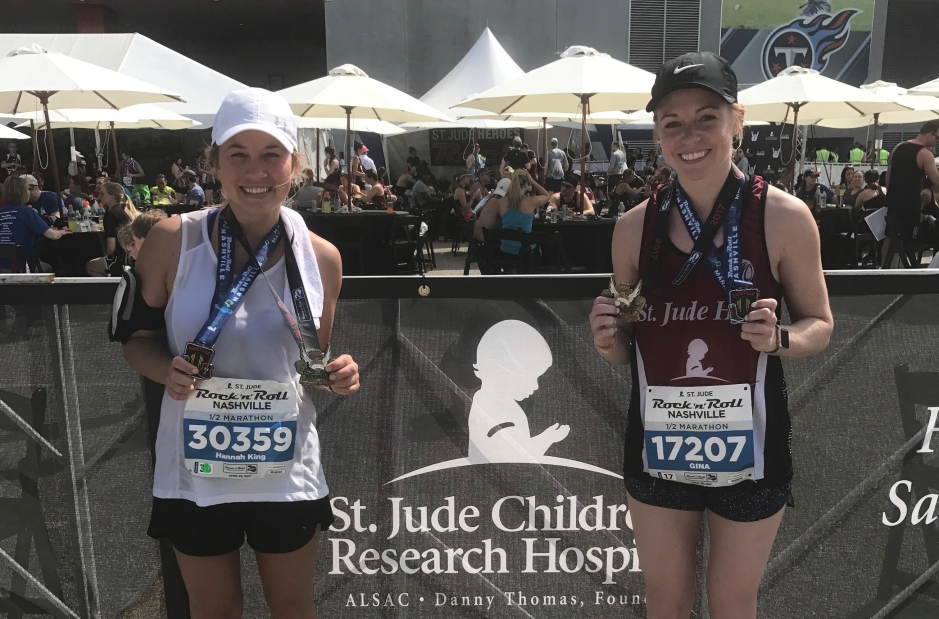 Guys, I did it. I am now the proud owner of a light up flashing medal signifying my finish of the Nashville Rock N Roll Half Marathon! WOO WOOP! Despite the hills… and the horrid humid heat… and the constant feeling of needing to use the restroom (yep, I said it), I found a way to finish that race with a big ole smile on my face and some pretty achy legs.

Hands down, signing up for the Nashville half was one of the best things I have ever done. Because I have never been a long distance runner, I knew I was going to be challenged physically and mentally while training, but I had no idea of the other things I would gain along the way. But in the end, I did register by convincing myself that “this would totally make me feel like a Nashville resident” and “the race is going to be a breezeeeee!” The real clincher for the deal was that I didn’t want to feel like a complete loser standing on the sidelines while watching two of my best friends actually run the race. Here we have it, FOMO wins again!

This time I’m glad it did. Here’s why.

I learned to like the discipline and dedication that came with running.

When I say I wasn’t a runner, TRULY I was not a runner. A turtle-like 5k was pretty much the max amount of miles these legs have every run, and I typically gravitated to running only two. However while I was in Helena, I started going to a trainer who primarily did HIIT and circuit style workouts, with a bit of running on the side. After about five months, I realized my running had improved dramatically (mainly my lung capacity!) while strength training had been my primary focus. At this same time, many of my friends started signing up for their own first long races and I finally felt in a place where maybe it didn’t seem so impossible for me too. So I signed up with the “definitely running security” of promising to raise money for St. Jude’s throughout my training process. If people donated, I would be running for us all. Any thoughts of backing out were immediately cut off then.

I don’t really believe there is any “best” way to train because something different works for everyone. However every single person must have the discipline and dedication to simply keep going. Some of my friends found that running every single day helped them stay on track, while putting in miles 2-3 times a week and continuing to cross-train worked best for me. I also realized that my first two miles of every run were always the most challenging, physically and mentally. To get over that hump I would mentally decide that I would finish the mileage I decided to run before I even left the house, and I would also have some fun while doing it. Once my train of thought changed, it was much easier to push past those initial miles and enjoy the long run ahead. Practicing discipline and choosing long term dedication are two things that most people are not necessarily great at, but I found that both granted me a feeling of empowerment over my days and decisions that I haven’t experienced before. And that, my friend, is an exceptional feeling.

I allowed life to surprise me.

Because of a 2016 Half Marathon shirt, friendly conversation, and most likely the whole thing being orchestrated by Jesus, I met my new group of friends in Nashville. Seriously, it’s kinda crazy how easy it was which makes me know the whole thing was run by the big man upstairs.

The first weekend after moving to Nashville I was standing in line with a few friends at an AWESOME burger joint (shout-out to Gabbys and those delicious milkshakes) when two guys walked up behind me, one wearing a half marathon shirt. Because I like chatting with strangers about shared commonalities, I began asking him about the race to get all the feedback he would offer. After about 15 minutes of shooting the breeze and realizing we had other shared backgrounds, I was deemed cool enough to receive an invitation to join them for beers and hockey that evening. Talk about scoring even before the Predators hit the rink!! *cue Tim McGraw singing I Like It, I Love It*!! (You will only get that if you are a Preds fan which I can now be boastful about since attending one game qualifies me as one.) Anyhoo…  I debated going for hours because sometimes I can be an awkward duck… also I couldn’t remember what they looked like and I was afraid I would go up to the wrong people (eek!). However I realized I could either be lonely or possibly make friends, so I spruced up my hockey knowledge, tried to recall all facial recognition and headed to that fateful bar.

Four weeks later and I’m walking into their home like I own the place. JK ← They are lazy and don’t want to get up to answer the door. But really, it’s cool when you give others the chance to surprise you. These new friends have offered to run with me while I was training, sent text of encouragement pre-race, and shared a few beers to celebrate afterwards. It’s crazy to realize how different my first few weeks would have looked if I hadn’t have signed up for the race: Allen would have just been a normal dude wearing a half-marathon shirt, and I would have never met the crew I now consider friends.

I had a lot of stinkin’ fun.

At the end of the day, the best advice I have to give is to choose for it to be fun! Map out areas that are pretty or interesting to run around. Listen to an awesome podcast. Crank up the music. Ask a friend to tag along. If the weather stinks, plan to run the next day and enjoy the lazy morning in. If the weather is extra perfect, try and run one mile further then planned.  Strive to make each training session fun and you won’t dread the next one! At the end of the day, I didn’t take training or the race too seriously because I wanted the experience as a whole to be an enjoyable one. Take your wins in stride and celebrate the improvements you make each week. Love on the friends who tell you “You’ve Got It!” and send you cookies just to cheer you on.  Yes, my friends, you ROCKED the encouragement train! And don’t forget to praise the Good Maker for making our bodies So. Freaking. Awesome. that they are able to run and function and do all the crazy intricate things they do to keep you alive, moving, and strong.

Friend, go find a race (or any new challenge!), sign up and let the experience surprise you.

I’m telling you. It will be so worth it.

P.S. THANK YOU to all of my donors and anyone who donated to a runners fundraiser for St. Jude’s Research Hospital. Through the Nashville race alone, they were able to raise TWO MILLION dollars. How incredible is that?! Thinking of these kids and you guys made running every mile worth it. Seriously, thank you. 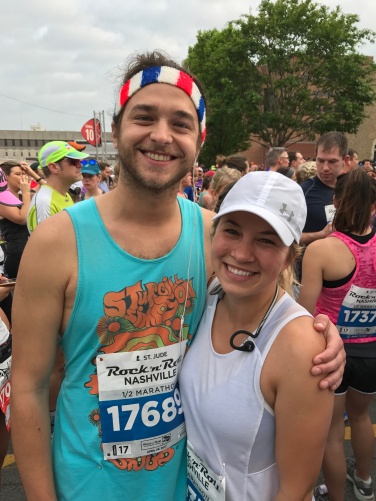 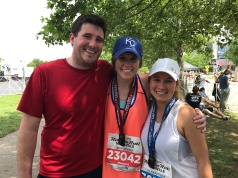 One thought on “St. Jude’s Rock N Roll Half Marathon”

However my husband and close friends call me Han or HK. This blog exists due to a deep longing for creativity. I firmly believe that we can be deeply fulfilled as people when we are intentionally seeking creativity in all areas of life. I see creativity within intentional and deep discussions with my friends, while hosting parties for family, when challenging myself with a home project and so much more. I am learning the freedom of creativity in connection over perfection. I hope this blog encourages you to join me on the journey of cultivating creative connection together.